After 28 years as a high school and college math teacher, Gary has left the teaching field to pursue music full-time. He loved teaching and he loved math, but always felt like he was neglecting his music, which was his original career-choice. He has been playing guitar since he was 10 years old and writing music since he was 13. By the time he was 16 he knew he wanted to be a composer and songwriter, but never quite figured out how to make a living at that, and soon had family responsibilities; so he and his beautiful wife, Donna, became teachers. 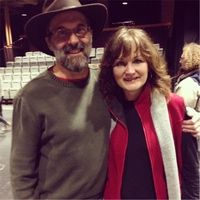 Gary & Donna met each other when they were juniors in high school. As you might expect, the very next year they were both seniors. As members of the school choir, they participated in the school musical, The Music Man. Donna played the mayor’s wife, Eulalie Mackecknie Shinn, and Gary was in the barbershop quartet. Gary would often give Donna a ride home from the rehearsals, and that is where it all began. Soon Gary was teaching Donna harmony parts to the many songs he had been writing since he was 13; the duo was born. That was late 1971. In 1973, they got married and soon were raising their 3 beautiful daughters, Lacie, Lanie, and Bonnie. The family has expanded now to include a handsome son-in-law and 3 cherished grandchildren.

Assuming that you have already read the short bio, we now want to tell you a little bit about the music. When Gary started playing guitar at age 10, he learned chords and basic rock and roll and country songs. A few years later, his dad showed him some Chet Atkins records and he was amazed at the finger-style playing. So he decided to become a finger-style player and eventually studied classical guitar for a time. All along, Gary was a huge fan of the Beatles, Bach, and Beethoven; and because of these, the 3 B’s he called them, he wanted to become a songwriter and composer. He studied music theory and composition in college, but eventually switched his major to mathematics because he needed to make a living. During these early years of their marriage, Gary worked at the old Country Dinner Playhouse in Dallas as a member of the pre-show group, the Heymakers. They needed a bass player, so Gary quickly became one and ended up playing bass for 7 years in the Heymakers and another 6 years in the highly sought after Dallas band, The Works. He started his math teaching career while still playing with The Works, but eventually left the band to work on his masters’ degree in math.

In addition to having written many songs and solo guitar works, Gary has also written the music for two musicals, McMulligan & Reigh and A Lone Star Christmas Carol. McMulligan & Reigh is a folk, classical, rock musical fairy tale. Gary invented the story and then asked his friend, Hunt McRoberts, to write the script. This piece was written to be performed by a rock band and full symphony orchestra. Gary recorded it in 1979 and then, in 1984, The Works produced a live concert of the story with the SMU symphony accompanying the band as they sang and played the songs. Actor and friend Gary Moody was the storyteller. A stage performance of McMulligan & Reigh was produced a few years later by the Richland College Theatre department. Gary plans to revisit McMulligan & Reigh someday soon.

In 2002, the late Gary Moody, original narrator of McMulligan & Reigh, asked Gary Taylor to write music for his new, Texas version of Charles Dickens’ “A Christmas Carol”. After recording the music at the legendary Cedar Creek recording studio in Austin, the musical was produced at Circle Theatre in downtown Ft. Worth, Texas with 19 mostly sold-out performances. In December of 2015, Gary & Donna produced a concert/storyteller version of the show at the Brauntex Theatre in New Braunfels. Former Works band members, Charles Crawford, Jim McAdams, and Robin Binford all participated in the production to make the show a Works reunion concert. The show was dedicated to the late Gary Moody and the late Chuck Shaw, co-founder of The Works.

Gary is now working primarily as a solo artist on guitar and as a singer/guitarist/songwriter. He released his first solo guitar CD, “Man Sitting in Chair playing Guitar” in 2016. The CD is available for purchase or download when you click right here. You can also sample or purchase Gary and Donna’s CD “A Lone Star Christmas Carol” and their latest CD, Endless Road.

So now you know a little about Gary Frank Taylor and about Gary & Donna. Please give the music a listen and if you like it, help us out in our endeavor to produce more by purchasing some of our music. Also, check into this site from time to time to see where Gary is playing, or what new projects he is working on. Thanks for your interest and support. We love you, yeah, yeah, yeah.